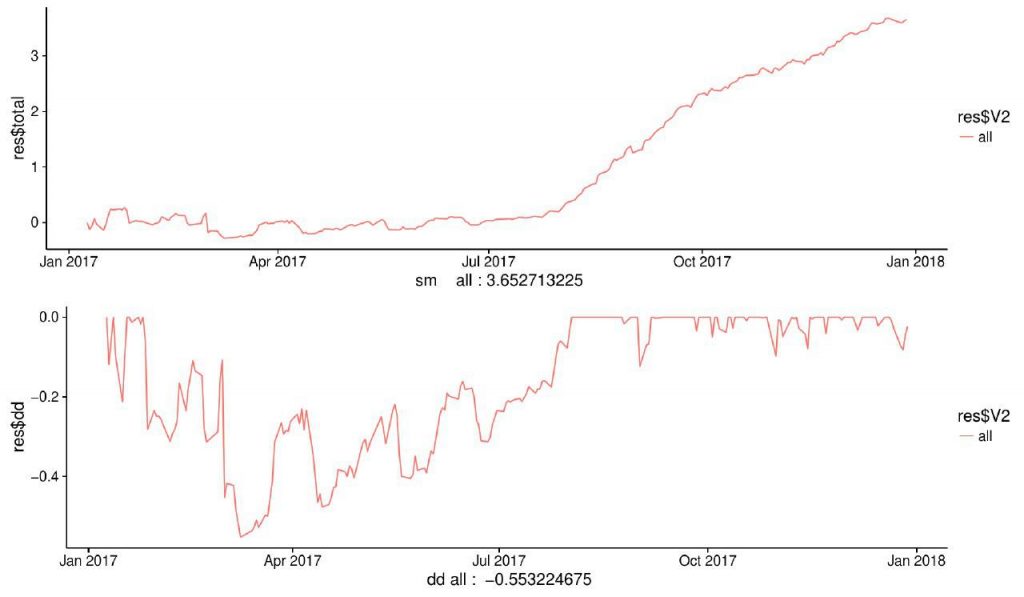 I have not written to the blog for a long time due to total employment, but the results of the year must be summed up. I will publish the results so far only for FORTS – for foreign platforms, firstly, it is too early, we trade for the full volume only for two months, and secondly, no one will believe it anyway 🙂

The beginning of the year on the Moscow Stock Exchange was absolutely sad – see the graph in the title (along the Y axis – the share of the GO used for all algorithms). The general decrease in liquidity, caused either by high commissions, or by the outflow of investments from the Russian Federation as a whole, in our case led to the fact that almost all last year’s strategies either stopped working, or their profitability barely covered the costs. Last year (see the results of 2016), approximately the same thing happened, and this is not a new situation, but a continuation of the one that caused the drawdown in October 2016. But this time it finally dawned on us that the algorithms had to change dramatically. By mid-April, with grief in half, they came up with several strategies and launched them with a minimum volume. Everything worked in full only by July, after many improvements and fixes, most of which were associated with reducing the latency of the warhead and using special techniques to speed up the management of applications. Equity was corrected, all losses were restored and a good profit was made, which made it possible to try strength on Western exchanges.

Nevertheless, they are extremely dissatisfied with the state of affairs at FORTS, liquidity there is only falling, there is no light at the end of the tunnel yet. We will try the currency section, the test algorithms are already working there, there is a positive result. Well, we hope that the Moscow Exchange will nevertheless make at least some efforts to attract participants on a deadline, otherwise all this will turn into a sandbox for working out HFT algorithms (at least for our team), since the technical indicators of the exchange are still very high level. And the prospect of earning good money is getting dimmer here every year. Unlike in the west, where everything is exactly the opposite.

Markets arrived at the right date

The Moscow Exchange Index after the "Head & Shoulders" pattern